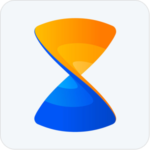 If you are looking for an app that can help you share data between devices without having to use any sort of cable then you have to use the Xender app which is one of the most popular apps in its category. Xender has over 500 million users worldwide which use the app on a regular basis to share files between different devices. you can share any sort of files between multiple platforms using Xender such as music videos photos and also documents. Xender is by far the best way to transfer large files between two wireless devices because it is much faster than a conventional Bluetooth connection, over 200 times the speed of transfer of Bluetooth. you do not have to use any USB device for new software to transfer data between two different devices if you are using Xender. Xender is a free app that can be downloaded on any device and it is free for every platform.

It has a very simple and easy to use interface which anybody can get used to and also the app supports more than 30 languages which only adds to the usability of this app. Xender also has a built-in media player which you can use when you have just received a video or audio so you can be sure that you got the desired file which you were trying to share. Xenderalso has the capability to resume the download if they fail because of the distance between the devices. Xender uses Wi-Fi and Wi-Fi hotspot to transfer files between devices so it is the fastest way possible to transfer any data between two wireless devices.